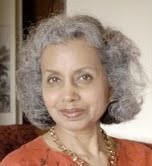 Bharti's article on memoir writing and a short story, Strangers on the Train is published in Khabar, December 2022.

Bharti's seventh novel, Season of Sacrifice: A Maya Mallick Mystery, is available in hardcover, paperback and as a Kindle edition. Seattle Weekly names it as one of the top five books to look forward to this fall.

Her 2016 historical novel, Goddess of Fire, was shortlisted for the Nancy Pearl Award in Fiction.

Read Bharti's article, Look Back, about writing a historical novel in the Oct 2015 issue of The Writer. Bharti wins a 4Culture Literature Grant for her novel-in-progress Season of Sacrifice.

Read Bharti's article, Food at your Fingertips, in the March 2013 issue of The Writer.

Bharti wins a 2012 4-Culture Literature award and a CityArtists Project award for a novel-in-progress Goddess of Fire.
She received a residency at VCCA (Virginia Center for Literary Arts).
Bharti's recent articles in The Writer magazine have been: transitions and character naming in November 2012, flashbacks in January 2012, a how-to piece in August 2012 issue and several more in the April 2012 issue.

Bharti's essay has been included in the literary anthology, IMAGINATION and PLACE: WEATHER. Another essay "Kimchi and Chrysanthemum" has been published in the anthology: Foreign Flavors

Read Bharti's essays in two other anthologies. NIGHT LIGHT: Twenty Short Works by Northwest Authors and WHEN IT RAINS.

Bharti's short story, Promised Tulips, is published in Seattle Noir, an anthology of mystery short stories. Publisher's Weekly calls her story one of the two best in the collection. Her book reviews can be found in the Seattle times. Bharti has been honored as a Living Pioneer Asian American Author.

From KUOW: "At 2:40 p.m. – Cooking Klatch: Bharti Kirchner
If you've spent your life straddling different countries, then your world is full of mixed influences in all kinds of ways – from language to clothing to music. But for some, food is the most vital link to any place. Bharti Kirchner grew up in India but she's lived most of her adult life in the United States. Practically every day she reaches into her grab bag of cultural experience to make choices when she cooks. And the result is a grande American mix. Bharti Kirchner is the author of four cookbooks as well as four novels. Today she shares a few recipes with Sara Lerner that combine the flavors and spices of India with Northwest staples."

Combine tamarind and sugar with a little lime juice and stir until smooth. Add the remaining lime juice, a little at a time, adjusting the amount according to taste. Chill until needed.

Steam potatoes until tender, 15 to 20 minutes. Cover and set aside.

Heat oil in a large skillet. Add onion and sauteuntil soft, 5 to 10 minutes. Add mustard seeds. When the seeds start to pop, add the potatoes and mix well. Stir and cook for a minute or so. Add lime juice, salt, and garam masala. Taste for salt.

Serve warm or at room temperature, garnished with parsley or cilantro.

Recipe adapted from The Healthy Cuisine of India: Recipes from Bengal Region by Bharti Kirchner

Add cauliflower, green beans, eggplant, and chili flakes. Simmer, covered, another 10 minutes, adding more water to prevent sticking. Uncover and cook another 5 to 10 minutes till the vegetables are almost tender, sprinkling a little water as necessary. Add peas. Cover and simmer another 3 to 5 minutes. Blend in garam masala. Using the back of a spoon, mash a few of the potato and yam pieces and mix well. Adjust salt.

Garnish with toasted cashews and serve.

Bharti's fifth novel, TULIP SEASON: A MITRA BASU Mystery is now out in Kindle and Nook and as a trade paperback! Amazon link:
http://amzn.to/JelAeY

Winner of the 2020 prestigious SALA Award in creative writing, Bharti Kirchner is the prolific author of twelve books -- eight novels and four cookbooks. Her latest is MURDER AT ANDAMAN: A MAYA MALLICK MYSTERY. Her sixth, a literary historical novel Goddess of Fire was short-listed for the Nancy Pearl Award. Her work has been translated into German, Dutch, Spanish, Marathi, Thai and other languages. Her fourth novel Pastries: A Novel of Desserts and Discoveries (St. Martin's Press) was selected for the Summer Washington Reads program. Darjeeling (St. Martin's Press), a third novel, received endorsements from top national authors. Shiva Dancing (Dutton), her first novel, was chosen by Seattle Weekly to be among the top 18 books by Seattle authors in the last 25 years. ("A finely crafted novel," says Publisher's Weekly. "A fresh literary terrain," says San Francisco Chronicle.) Sharmila's Book, a second novel, was published by Dutton. ("Smart, swift, and funny," says Publisher's Weekly.)

Bharti has written numerous articles and essays on food, travel, fitness, and lifestyle in magazines that include Food & Wine, Eating Well, Vegetarian Times, The Writer, Writer's Digest, Fitness Plus, and Northwest Travel. Her essays have appeared in eleven anthologies. She is a freelance book reviewer for The Seattle Times and has profiled celebrities for the International Examiner. She has been widely reviewed and profiled in magazines and newspapers throughout the country and has appeared in many radio and television shows. She is a popular speaker at writer's conferences, book festivals, and universities throughout the nation.

Prior to becoming a writer, Bharti worked as a systems engineer for IBM and as a systems manager for Bank of America, San Francisco. She has also worked in Europe and other continents as a computer systems consultant.

Review of MURDER AT ANDAMAN:

From the Wisconsin Bookwatch: "Another carefully crafted mystery from the pen of Bharti Kirchner, "MURDER AT ANDAMAN" is a riveting read that will have special appeal to dedicated mystery buffs and is a 'must read' for the growing legions of Bharti Kirchner fans. Simply stated, "Murder at Andaman" is an original and unreservedly recommended addition to any and all community library Contemporary Mystery/Suspense collections." To read the entire review,  Click here.

From the Khabar magazine: "A lively and entertaining mystery that transports readers to a new, exotic and warm locale. Maya Mallick makes for an endearing and simultaneously whip-smart detective. MURDER AT ANDAMAN is a breezy and fun addition to the Maya Mallick series."

Season of sacrifice: A Maya Mallick Mystery
Published in September 2017. First in the series, set in Seattle, it tells the story of a young, brilliant, dedicated scientist who dies in a violent street protest, leaving behind her questions for a new sleuth to solve. “Readers will look forward to seeing more of the astute Maya.” (Publisher’s Weekly)
Goddess of Fire: A Novel
Released in 2016. Set in 17-Century India, the story of a village girl who becomes one of the most prominent women in India.
Tulip Season: A Mitra Basu Mystery
"Engrossing," The Seattle Times .
Click http://tulipseasonmystery.wordpress.com
Darjeeling: A Novel
Sweeping family saga, about forbidden love and family honor (Sensual...suspenseful, Kirkus Reviews)
Sharmila's Book
Sharmila, an American woman, travels to India for an arranged marriage. ("Smart, swift, and funny" -- Kirkus Reviews)
Shiva Dancing: A Novel
A spirited woman takes a fascinating journey of self-discovery (Finely crafted - Publisher’s Weekly)
Pastries: A Novel of Desserts and Discoveries
A talented pastry chef rediscovers her love for life. (Witty. sensitive, elegant .. San Francisco Chronicle)